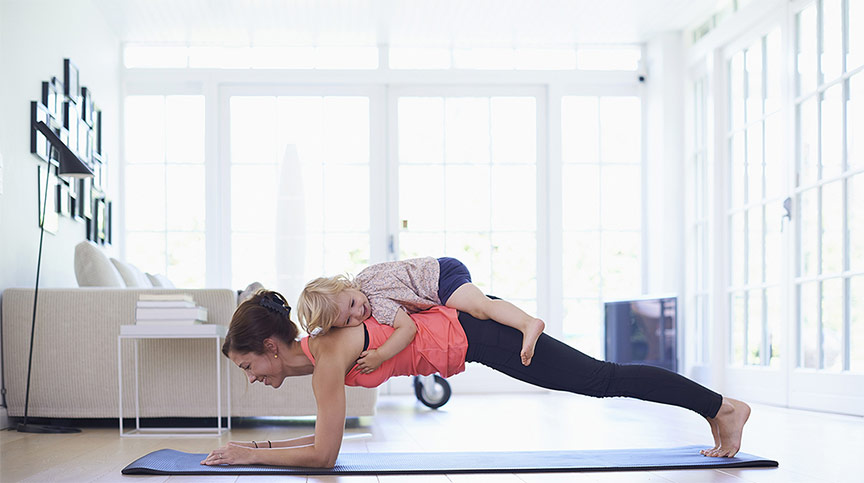 Exercise Is Linked to Leadership Effectiveness

When we’re time-pressed and stressed out, that’s exactly when we need to make time to exercise. This is the message we give to top executives at our senior executive leadership programs, where we help participants focus on being “Fit to Lead.”

Staying healthy during times of stress requires either reducing the strain or boosting your ability to weather its effects. Try to find ways to reduce the external pressures that cause stress and overload. Meanwhile, improve your ability to process stress by establishing healthy habits.

Not only do people gain huge health benefits when they exercise, but, according to our research, executives who are physically fit are also considered to be more effective leaders than those who aren’t.

Exercising and staying healthy doesn’t need to be time-consuming. Shorter, multiple bursts of intensive activity can be just as beneficial as longer, less intensive bouts, notes Sharon McDowell-Larsen, an exercise physiologist who has worked closely with top executives at our Leadership at the Peak program.

She recommends these 3 mini-workouts, posted on YouTube and created by our fitness instructors, to help you combat the stress of leadership. Each can be done in 5 to 10 minutes, and they’re all easily integrated into a busy schedule, whether you’re in a hotel room or at home.

McDowell-Larsen suggests these 5 tips for making exercise a way of life: 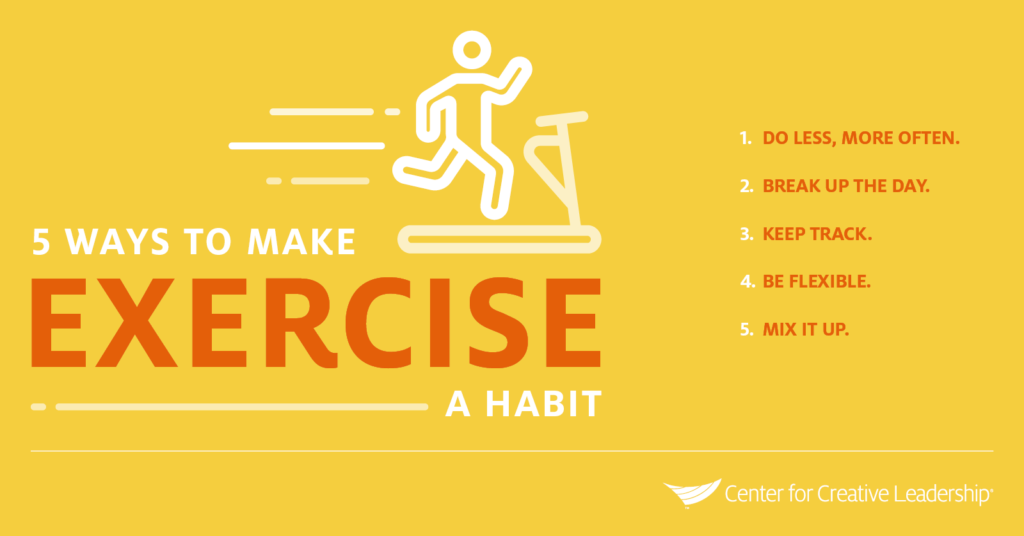 Dive deeper into 8 practices that keep you healthy, focused, and functioning with our book, Resilience That Works: Eight Practices for Leadership and Life.

How Does Exercise Improve Brain Function?

Exercise boosts brain health and function in just about every way that we can measure brain function. Research has consistently shown that exercisers outperform couch potatoes in tests that measure long-term memory, reasoning, attention, problem-solving, creativity, and fluid intelligence.

Regular exercise has also been shown to improve mood states — i.e., it helps reduce anxiety, depression, and pessimism. Conversely, it improves optimism and self-efficacy. Exercise has also been shown to induce angiogenesis (or the creation of new blood vessels) in the cerebellum, the hippocampus, and the motor cortex. Angiogenesis declines with age; thus exercise can prevent this decline.

New blood vessels improve blood flow, which improves oxygen and nutrient delivery (the hippocampus, which is essential for memory formation, is highly dependent on oxygen) as well as better removal of waste. Increased blood flow velocity (as occurs during exercise) is significantly associated with less cognitive decline, whereas lower velocity is associated with Alzheimer’s disease.

Aerobic exercise also has been shown to increase the production of neurochemicals that promote growth, differentiation, survival, and repair of brain cells. There are several neurochemicals that help to mediate the benefits of exercise on brain health, including brain-derived neurotrophic factor (BDNF). BDNF increases in response to both acute (a single bout) and chronic (regular) exercise. BDNF keeps existing neurons young and healthy, and encourages the formation of new cells in the brain — particularly in the hippocampus. In short, exercise nourishes the brain.

Aerobic exercise also enhances several neurotransmitters in the brain, including circulating dopamine, serotonin, norepinephrine, and acetylcholine. These neurotransmitters play a role in mental health, mood enhancement, and wakefulness, among other things.

The bottom line: Increase physical activity by moving more during the day (a step counter can help with this) and by engaging in regular intentional exercise that is varied in duration, intensity, and mode — e.g., do intervals 1–2x per week, sustained endurance exercise 2–3x per week, yoga and/or resistance training 1–3x per week. The key is consistency over time.

Finally, sit less and move more. Get up every 20–60 minutes and stand, move, or walk.

Regular exercise will not only help your personal health, but it will help you and others at the workplace as well, making you a better leader.

Help your people understand the connection between exercise and leadership effectiveness. Our resilience-building solutions will help your leaders avoid burnout — and burn bright instead.

The Good Health and Leadership Connection Foods That Fuel Your Brain 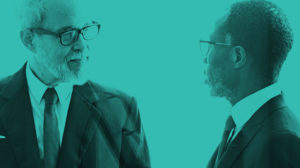 Subscribe to our eNewsletters to get the latest on cutting-edge, leadership insights & research.
SIGN UP FOR NEWSLETTERS
November 16, 2020
Leading Effectively Staff It’s Time to Break Up with Burnout. Here’s How.

What can organizational leaders do to support their teams in dealing with burnout, and in tandem, address and reduce turnover rates? Learn steps to take today to create the conditions for everyone to bring their best selves to work and foster an environment that supports their people and the communities they serve. 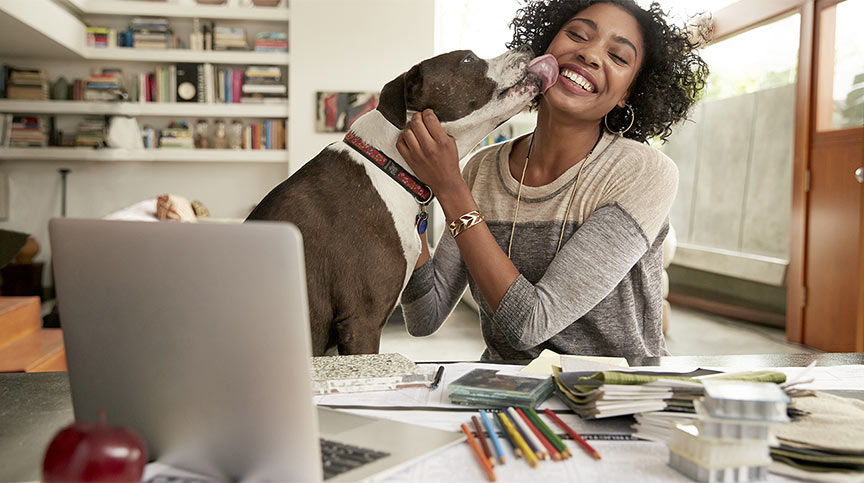 Learn why resilient leadership is important and 8 steps that will help you enhance it, in both your personal and professional life. 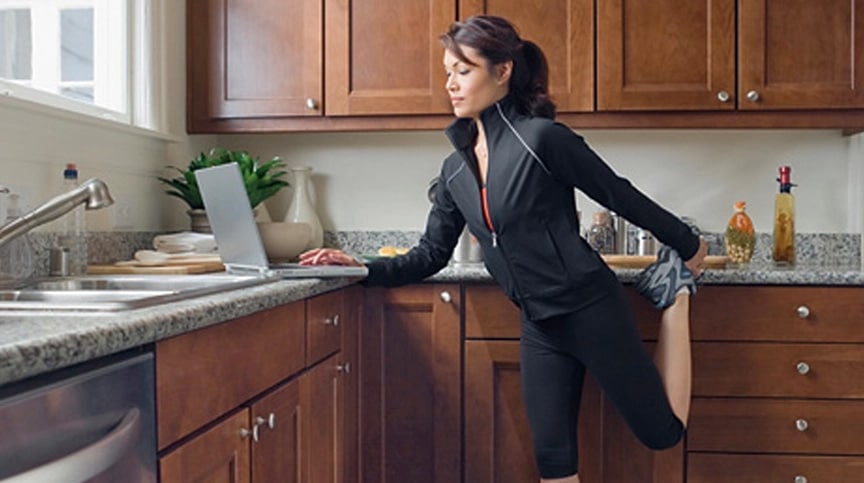 Why “Balance” Is a Faulty Metaphor

Does it seem like there aren’t enough hours in the day? Most people want better work and life balance. But the often-mentioned “balance” metaphor isn’t particularly helpful or realistic. Here’s why and how you can aim for work-life integration instead.